Tom is a builder on a mission to seek out the very best materials and design features for helping to make a tiny house on wheels (or any home for that matter) fire resistant. His home is located in Kinglake, the location of the Black Saturday bushfires, a series of bushfires which ignited on the 7th of February 2009 and which were amongst the worst Australian bushfires of all time. 180 people tragically lost their lives and many were left homeless. This year, 2019, will mark the 10 year anniversary of that devastating event.

Even almost a decade later, you can still see the scars on the land from the fires. Tree trunks scorched by the flames are a stark reminder of just how quickly nature can turn on you.

Tom’s 16ft (5 meter) long tiny house on wheels provided a perfect testing ground for fire resistant design, with all aspects of the home, including all of the construction materials being carefully selected for high performance and insulation value, while ensuring there were as few areas as possible where ignition of the home could occur.

The home’s construction uses dense timber with fire-resistant paint and metal in it’s construction, allowing it to maintain it’s fire resistant properties while still being a lightweight mobile structure. At first look, it seems like a relatively normal tiny house, although there are some very impressive additions to the design – such as the fireproof shutters which fit over all the windows and make the house look a bit like a formidable fortress.

In this video we extensively cover the design and material decisions which have been included in this tiny house build, along with displaying some of the fire tests which were conducted on the materials used in the homes construction.

For many around the world, forest fires are becoming a normal part of life. Last year we caught up with tiny house builder Ryan, who had downsized to a smaller tiny house on wheels to allow him to escape forest fires more easily by transporting his home, after nearly getting caught out in the Ojai fires of 2017.

Tom is quick to advise against relying on mobility in a fire though, as he points out in this video that some fires can move extremely fast and come from multiple directions, occasionally meaning you may be faced with a situation where you have no choice but to leave your home and hope for the best.

That being said, thanks to many of the innovative design features in this tiny home, we are now all equipped to make some great decisions to help add resistance to fires to our homes if we are constructing (or parking) in some at-risk areas.

While a tremendous amount of thought has gone into the exterior design of this home and it’s materials, just as much though has gone into the home itself and some of it’s beautiful features. The design has been well thought out in three dimensions to maximise the use of space and there are beautiful design elements which have been included such as the window herb garden and clever off-the-grid hot water system, where water is heated on the stove top and elevated to be able to gravity feed into the shower.

To add to it’s design features, this off-the-grid solar powered home has also incorporated elements of passive solar design, including an ingenious window eve system which slots into the window cavity, preventing the home from overheating due to solar thermal gains from the summer sun, but still allowing gains in the winter.

Tom’s stunning home was built for a material budget of around AU$25,000. Of course, that doesn’t include the incredible amount of labour which would have gone into the homes construction, however this is still a remarkable low cost build for a very high performing home.

It’s always inspiring to meet builders like Tom, who really push the boundaries of what’s possible in tiny house and small space design. Be sure to watch the full video (above) to see just how many clever features have been built into this home. 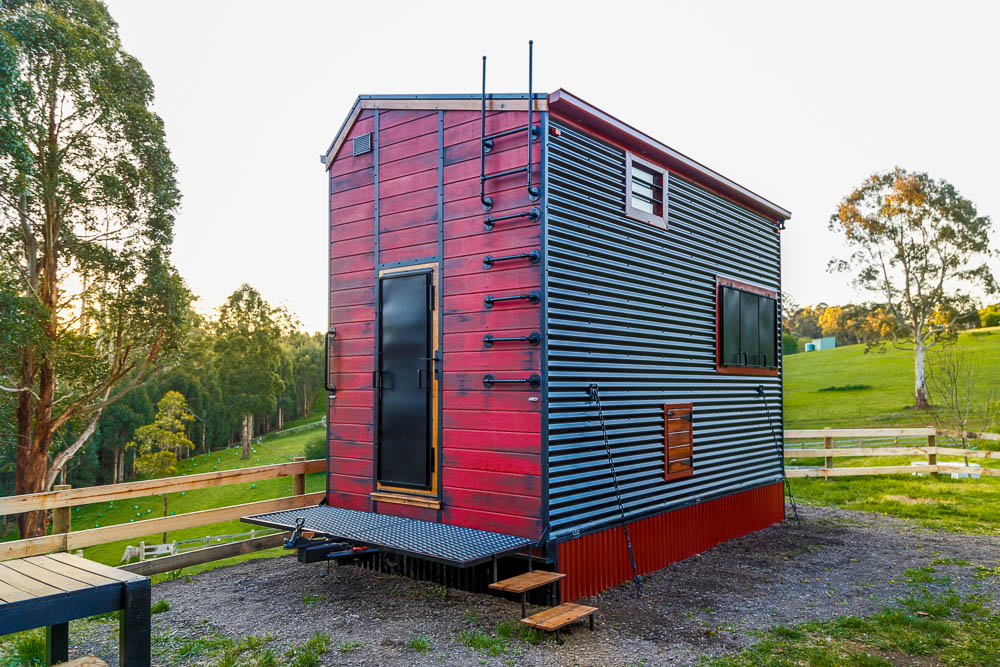 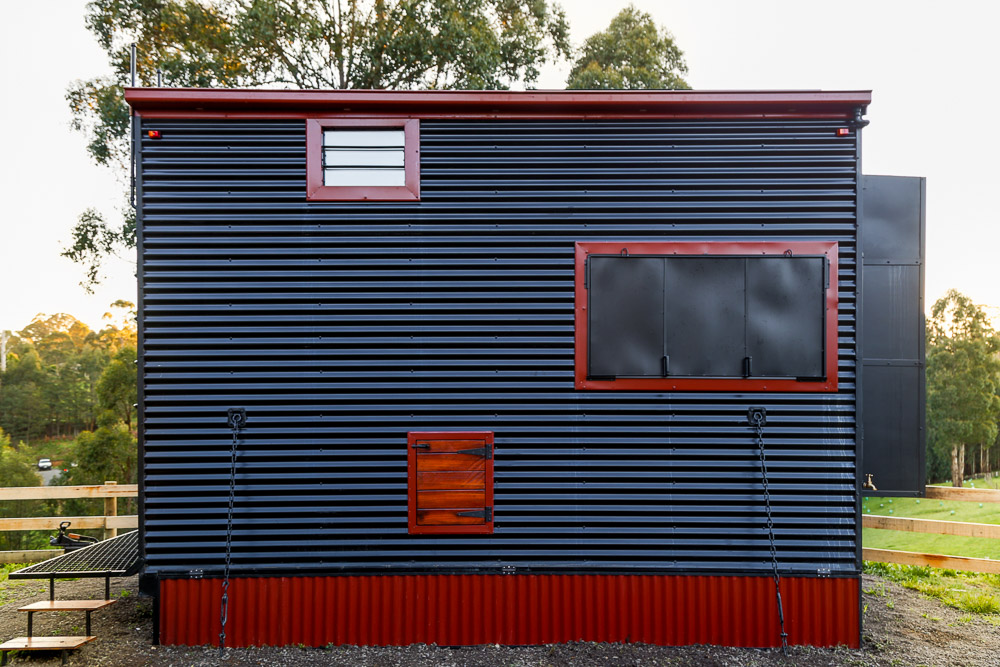 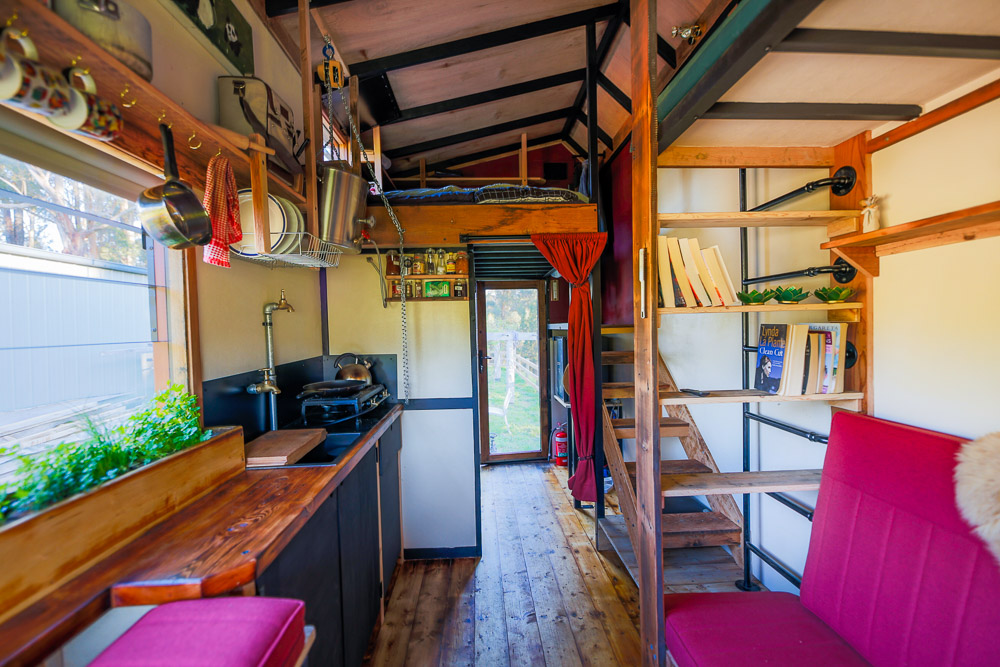 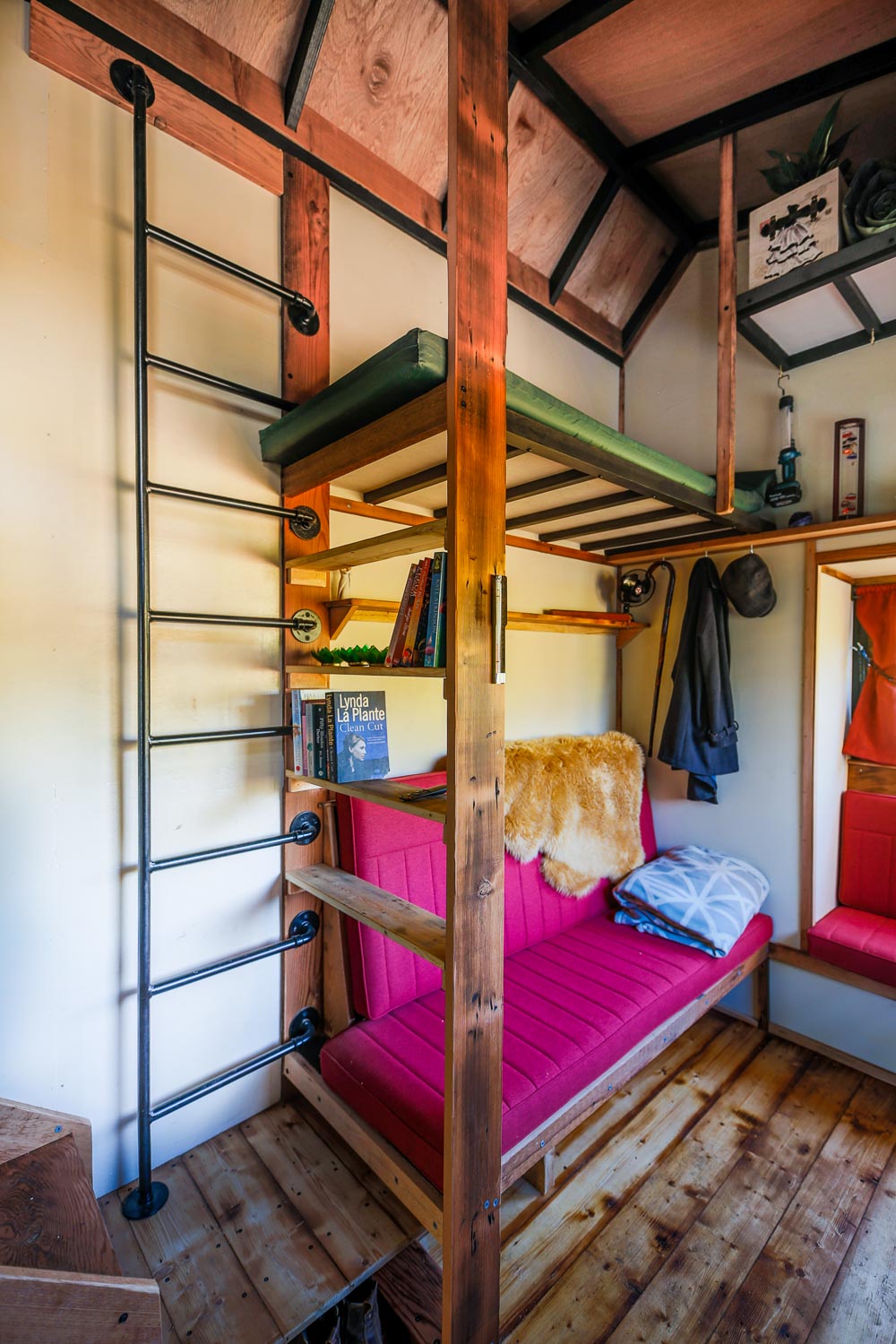 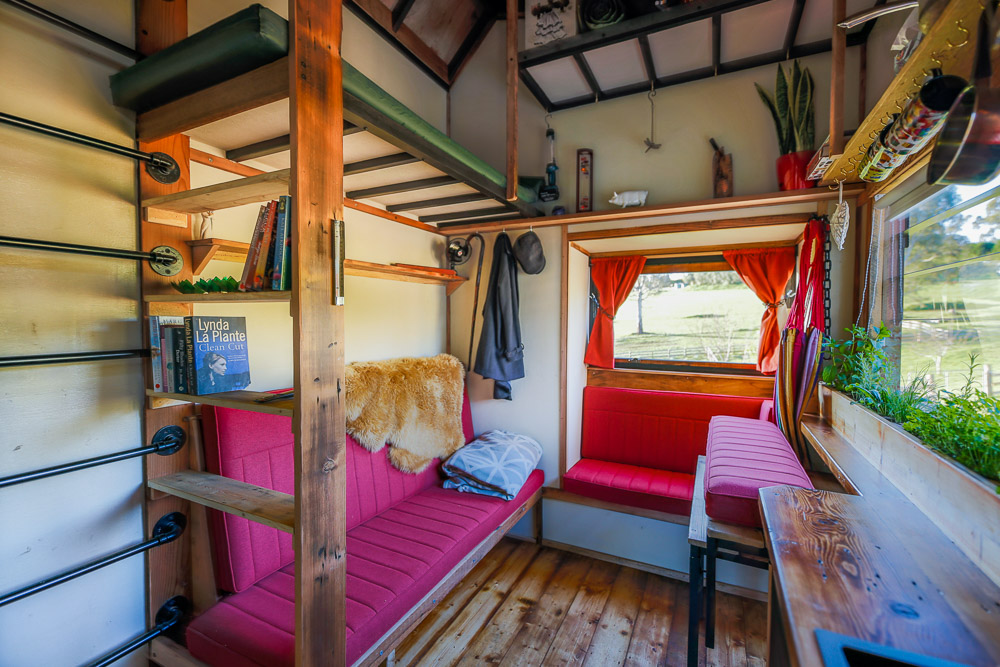 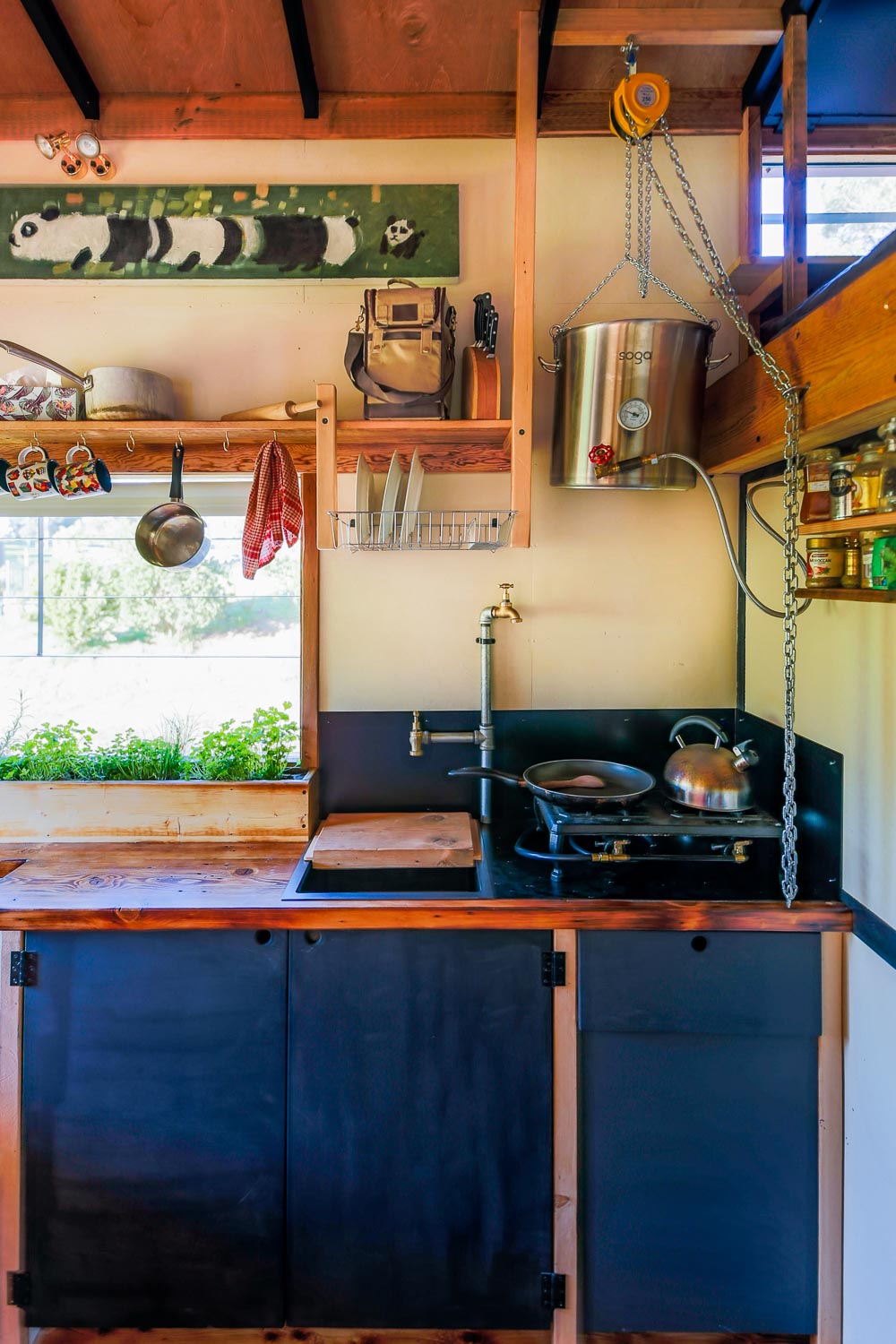 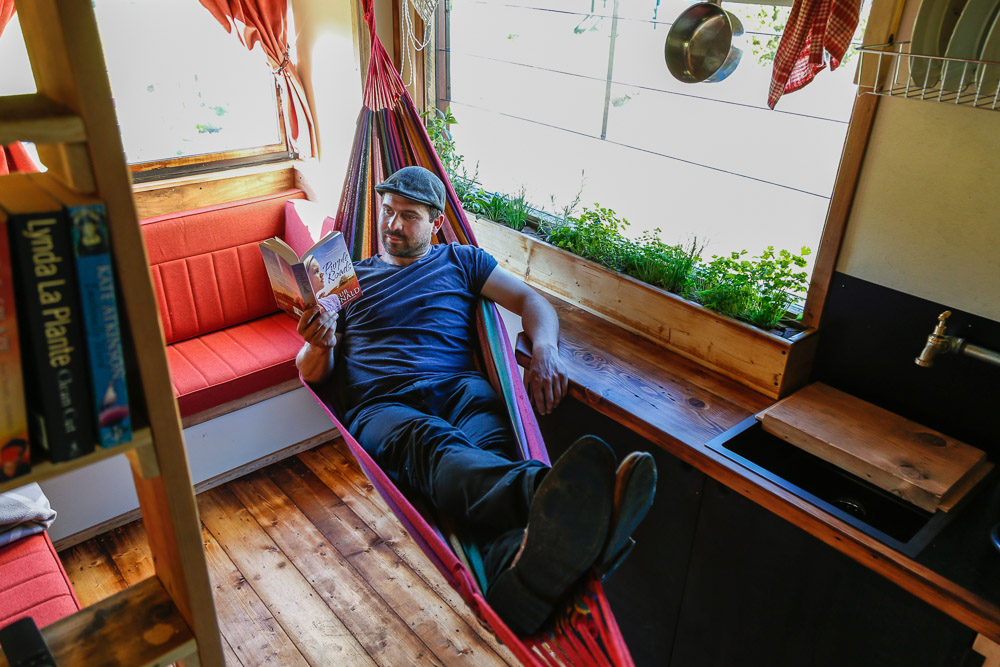 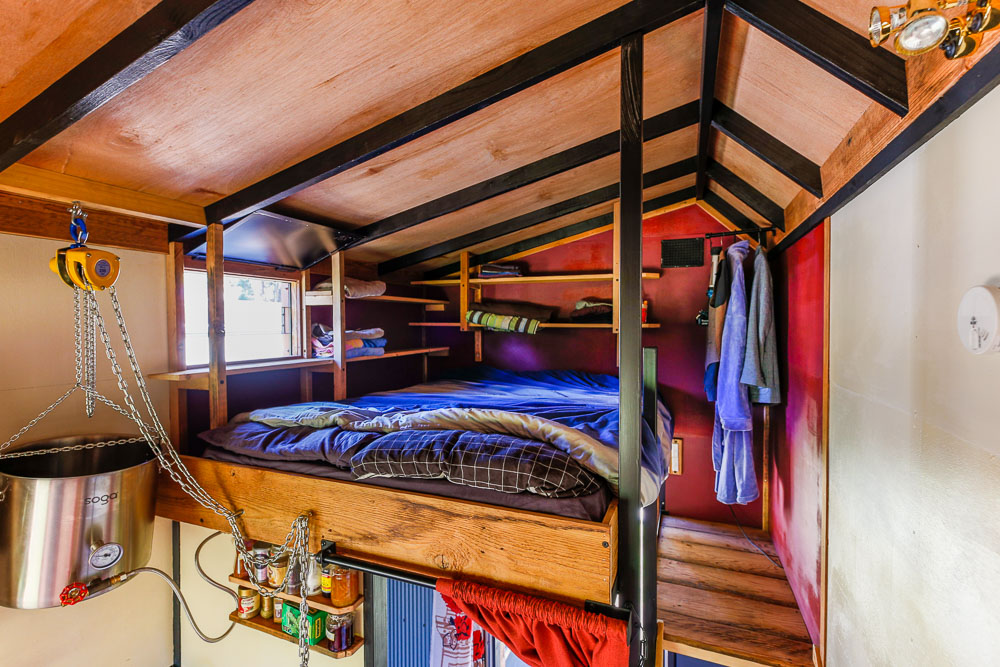 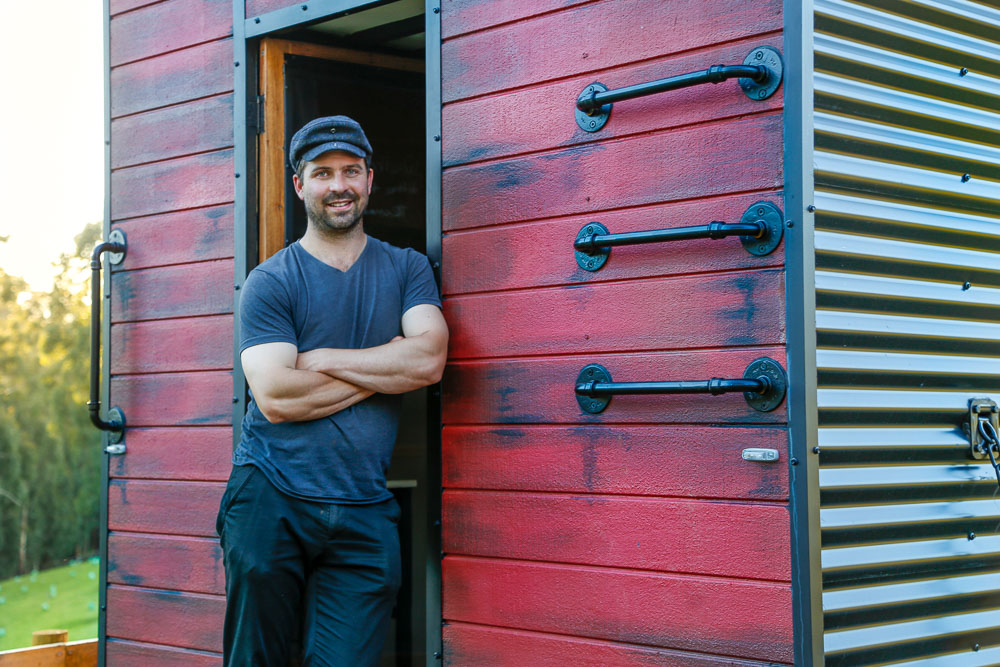 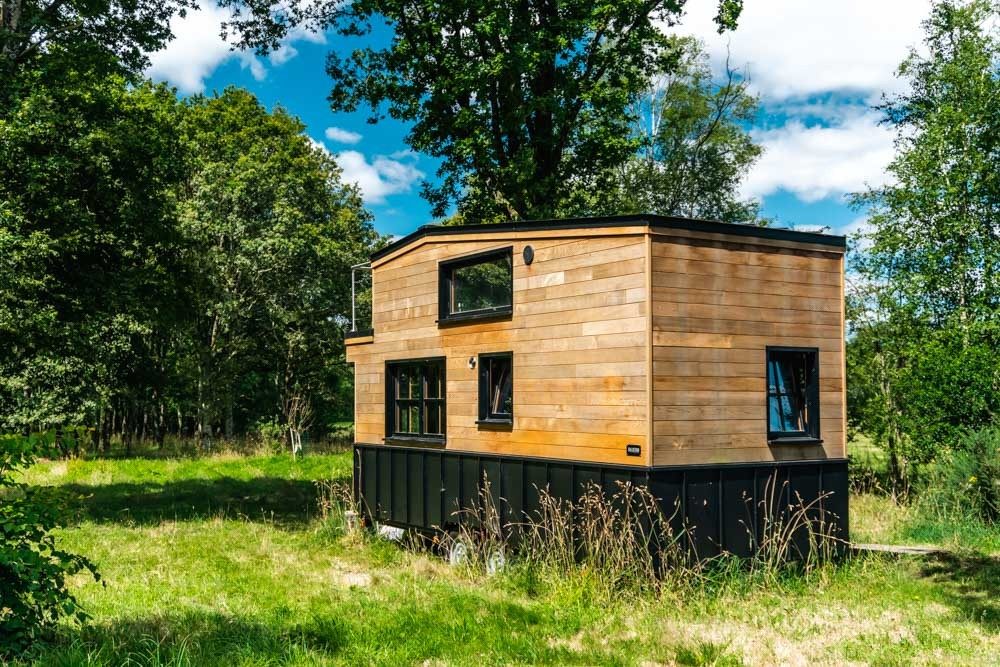 This tiny house in France is a musicians dream and amazingly contains a full music studio within the small footprint of the home. 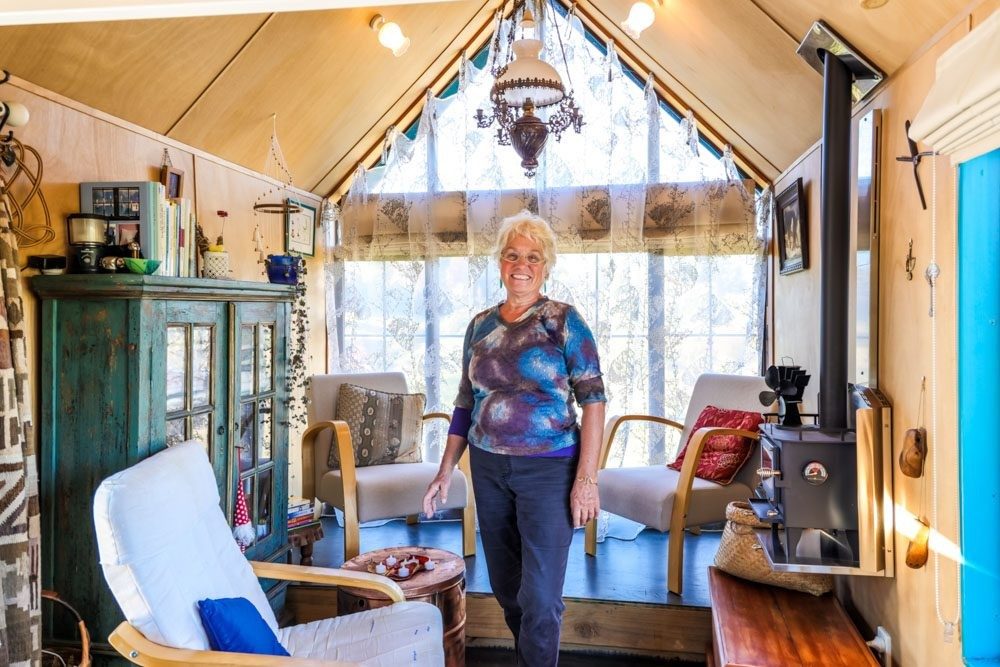 This woman's wonderful dual tiny house home and studio setup creates quality of life and freedom in both the home and the workspace.