Life In The World’s Most Traveled Tiny House

Tiny House Expedition is the world’s most traveled tiny house. This intrepid family has traveled over 40,000 miles (64,000km) in their 20′ (6m) tiny house on wheels and is still going, as they venture all over North America filming their documentary series Living Tiny Legally. 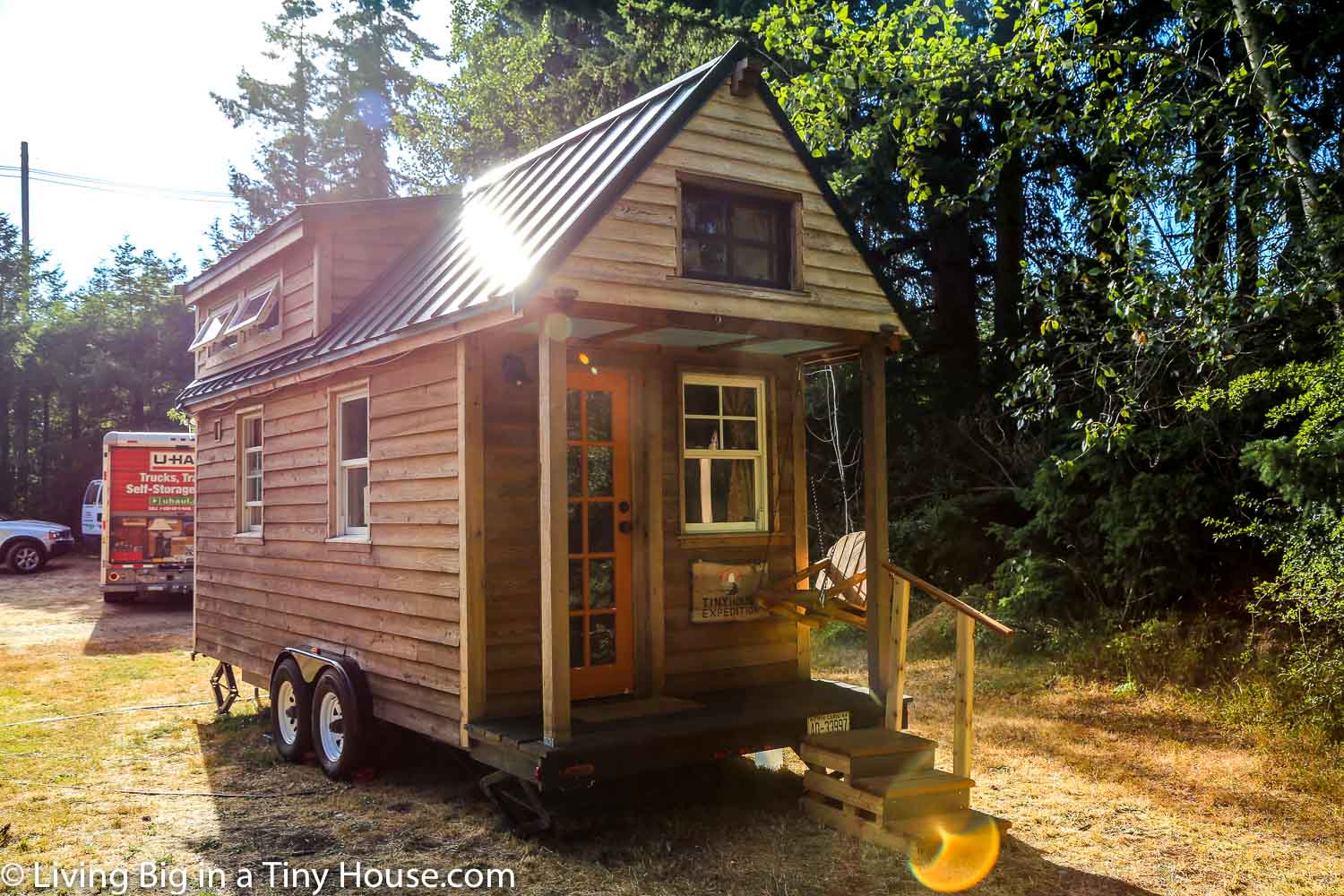 One of the most incredible things about a tiny house on wheels is the trailer that it sits on. What separates these homes from others is that they are completely mobile and have the ability to travel wherever you go. Most tiny homes don’t take full advantage of that fact and many will only move a handful of times in their life. The Tiny House Expedition tiny house on the other hand is built for travel and spends the majority of it’s life on the move, being towed all over North America with a U-Haul truck. 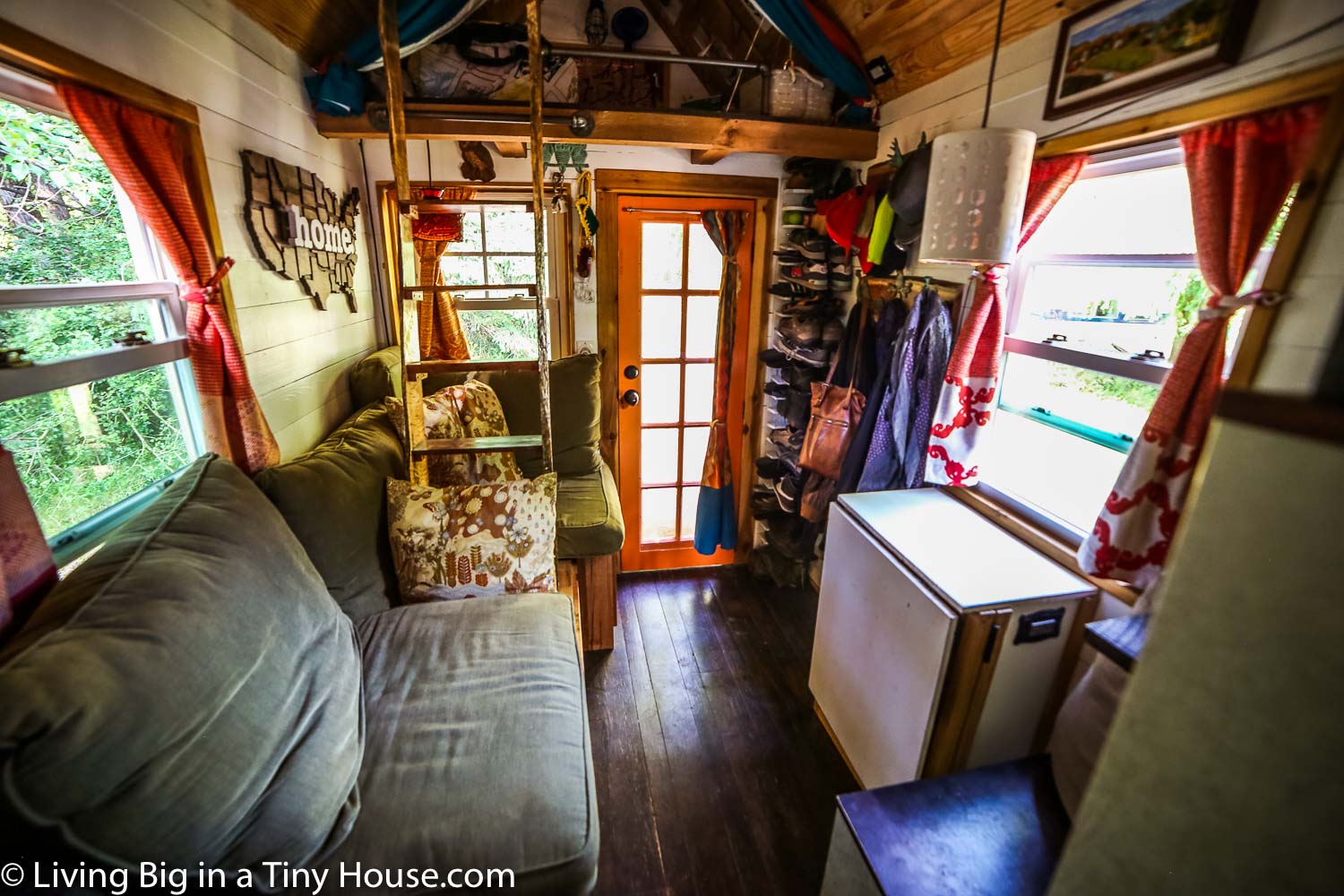 Life on the road for the family of 3 doesn’t mean compromise, as this home is fully featured and has absolutely everything they need to be comfortable, including a lounge area (also filled with storage) 2 sleeping lofts, a dining / office table,  a bathroom, kitchen and even enough shoe storage for a centipede! 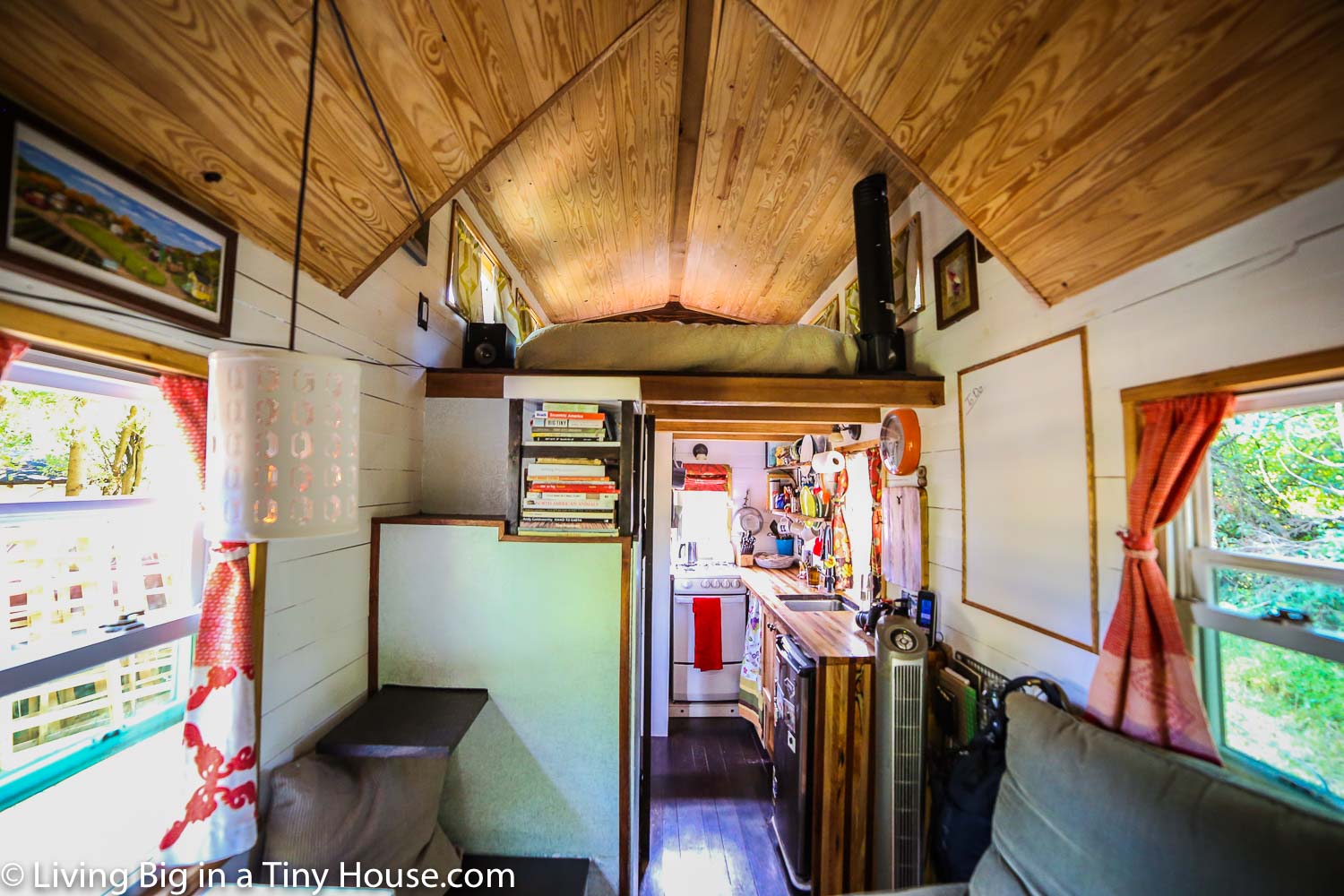 Despite being so fully loaded, the tiny house is light, open and doesn’t feel at all cramped. It’s packed full of incredibly clever space-saving features, such as the ingenious pull-out stairs to access the sleeping loft and the plethora of hidden storage solutions found throughout the home on wheels. 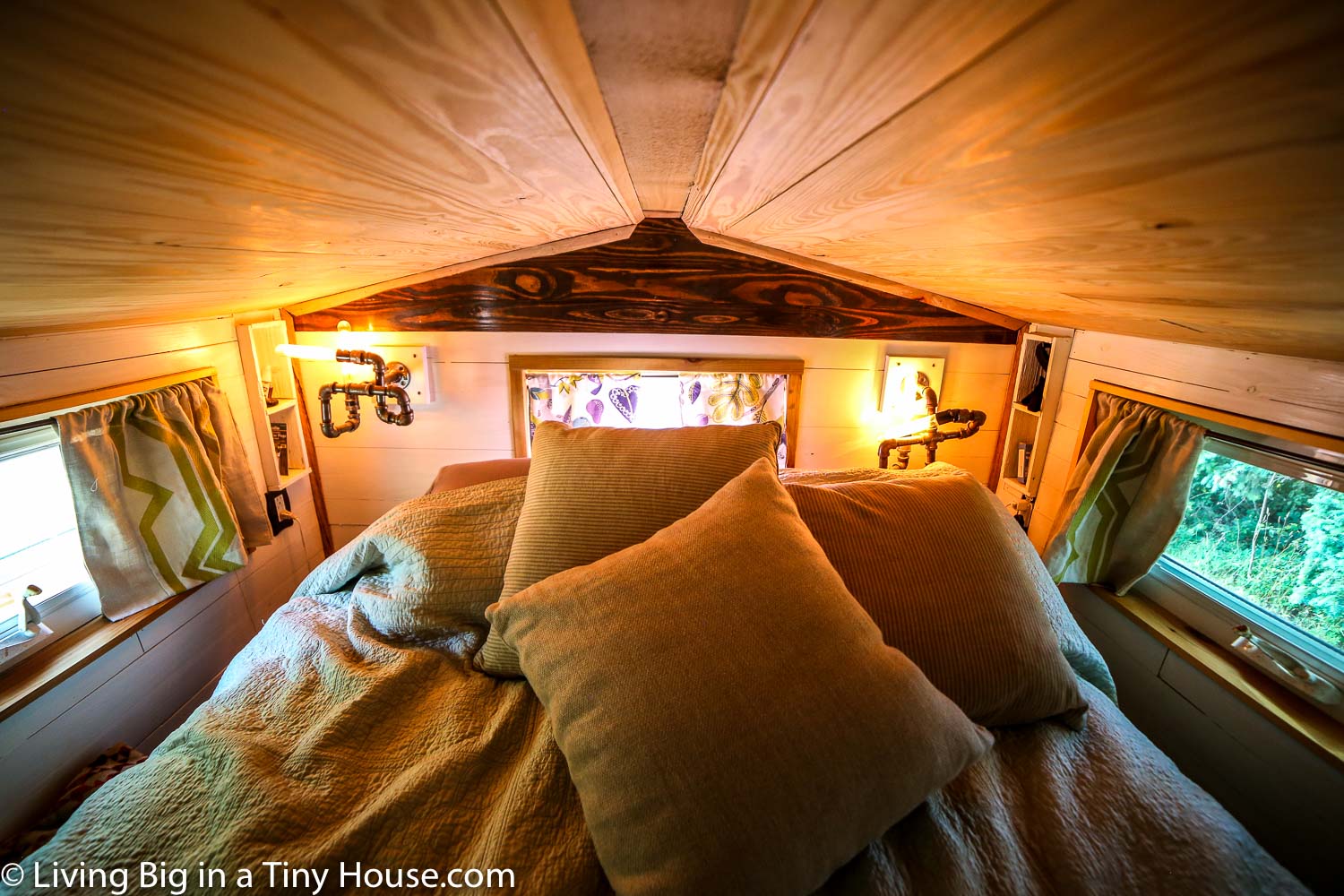 Beyond function, the couple have also paid great attention to beauty in the tiny house and ensured they constructed a space which was inviting to live in. From beautifully selected timbers to the Pinterest-worthy, copper-pipe Edison lights in the sleeping loft, this house is packed with delights that make it a joy to come home to. 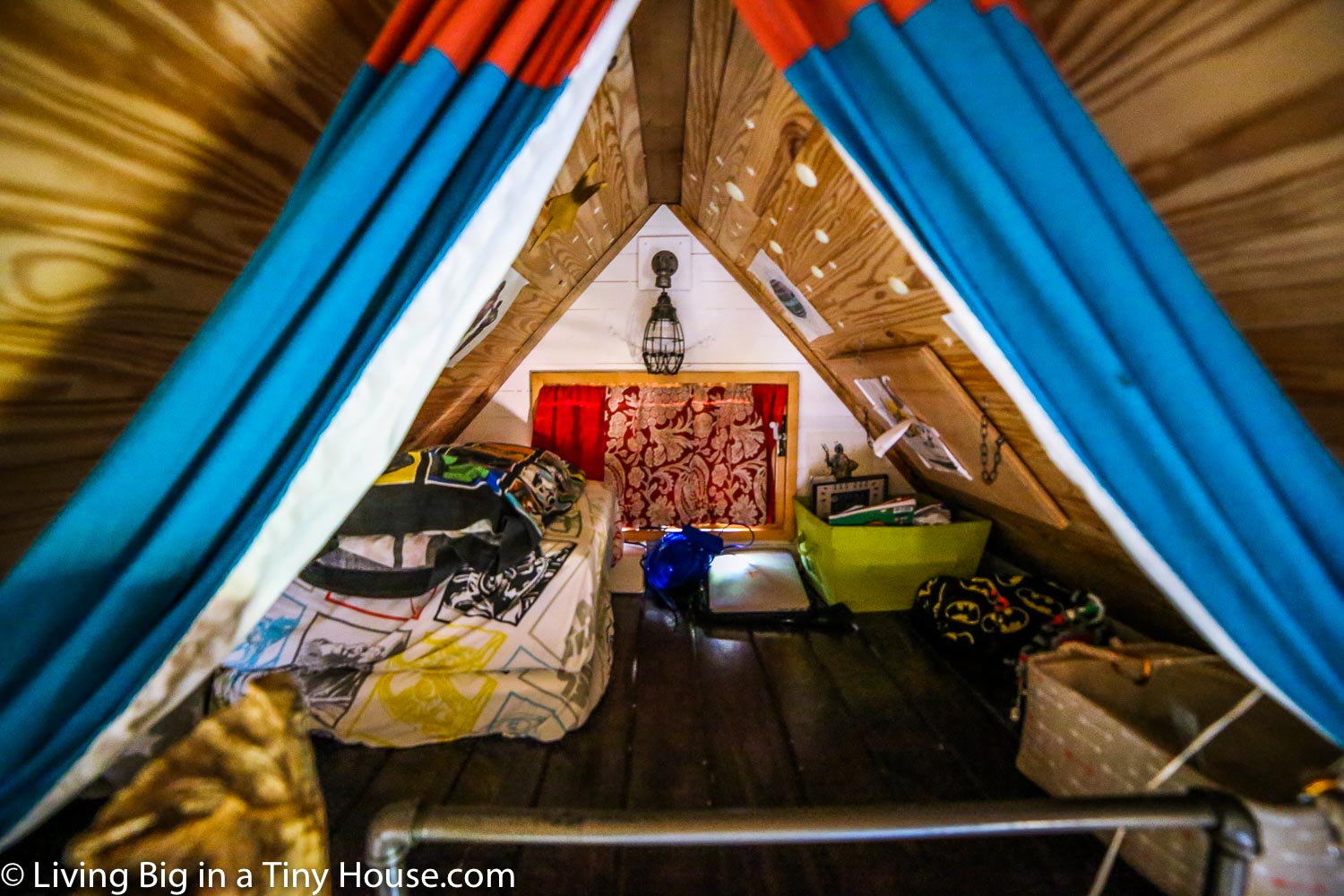 Christian and Alexis live full time in the tiny home, while Alexis’s son Garrett lives there only part-time. When he does visit though he has a feature-packed loft area which he helped to design himself. His loft has some great additions such as a fold-down table and even a pulley lift to help him get his toys into the space. 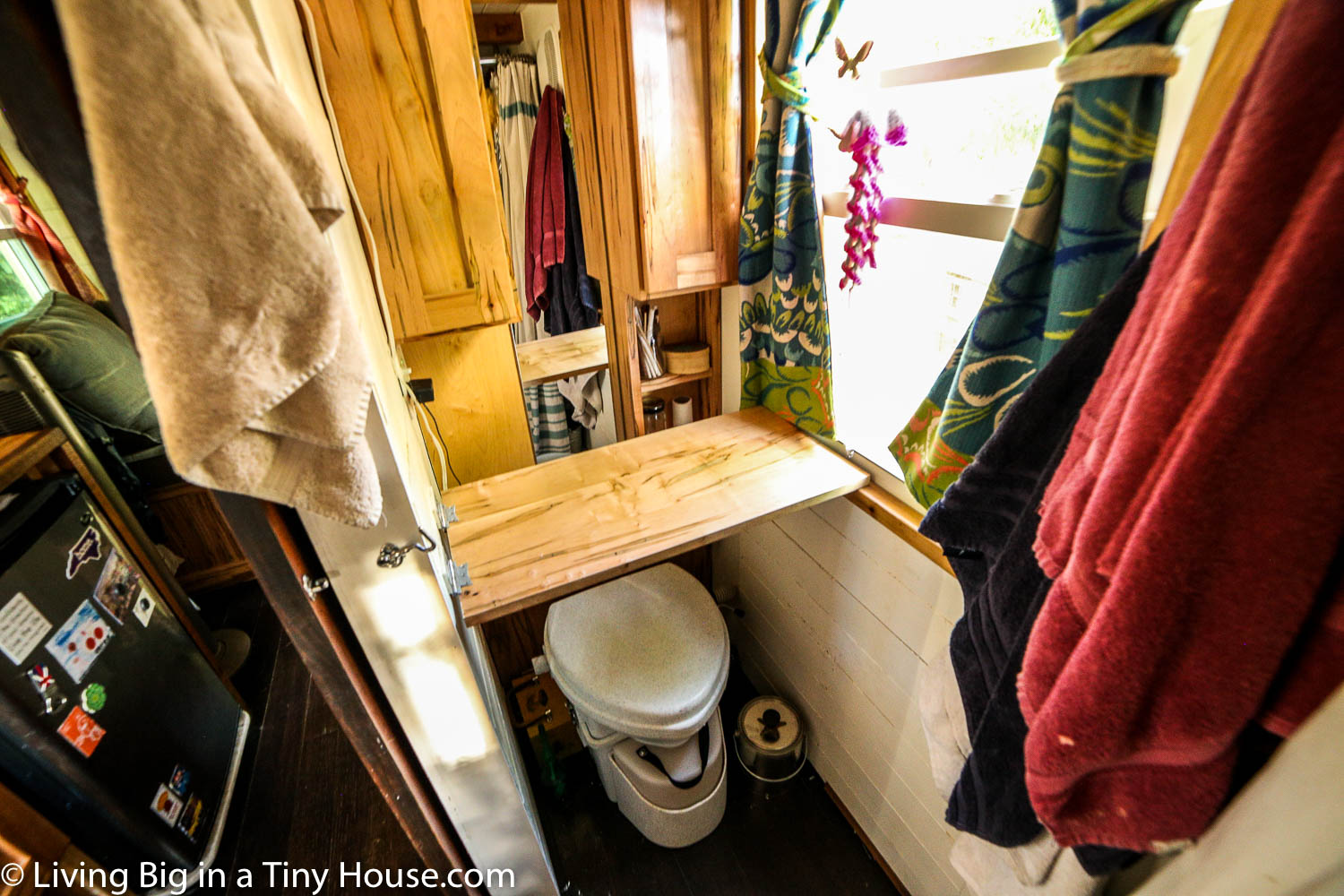 The bathroom appears simple but wastes absolutely no space and is packed full of functionality. There’s a large shower and surrounding the toilet, lots of cabinetry has been built in adding storage space to the room. A unique fold-down table provides a vanity-like surface for shaving or doing make-up. Originally the couple were using a bucket composting toilet but have recently replaced that with a Natures Head Composting Toilet, which requires less maintenance and can go much longer without emptying. 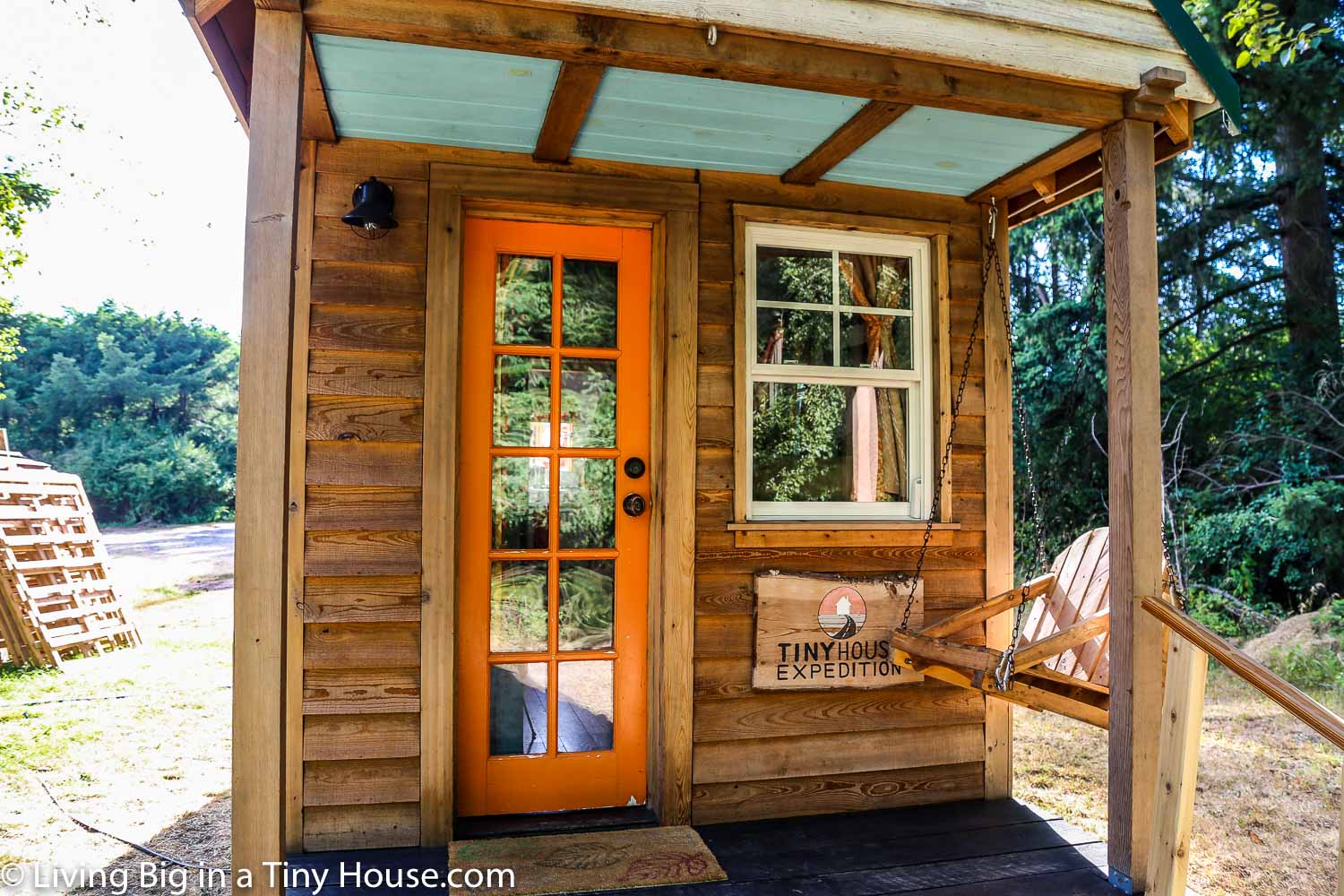 Now with well over 40,000 miles behind them, this family still has no plans to slow down. The tiny house gives them the best of both worlds, a safe and secure space to call home but also the freedom to explore the world and constantly travel. Christian and Alexis are an inspirational couple who are making a positive impact in the world. Their documentary series, Living Tiny Legally is a valuable contribution to the tiny house movement and has helped to further progression of legalisation.  You can find out more about their adventures on the Tiny House Expedition website. 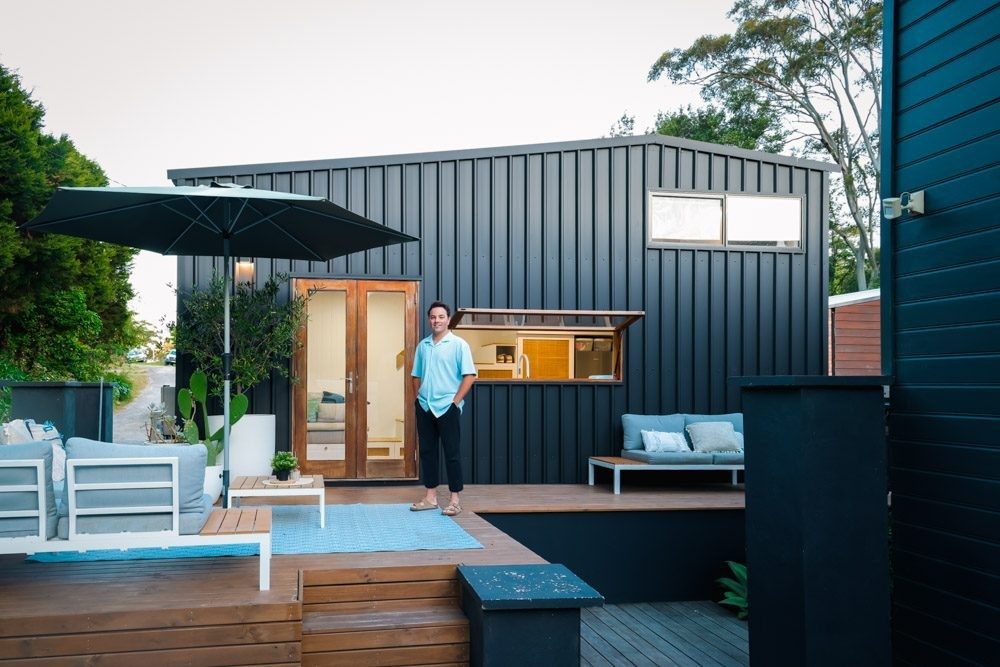 This Amazing, Light & Spacious Tiny House Was Built For A Mind-Blowing Budget!

This Amazing, Light & Spacious Tiny House Was Built For A Mind-Blowing Budget!

This beautiful and ultra affordable tiny house is light, simple, spacious and has been stunningly styled like a beach house. 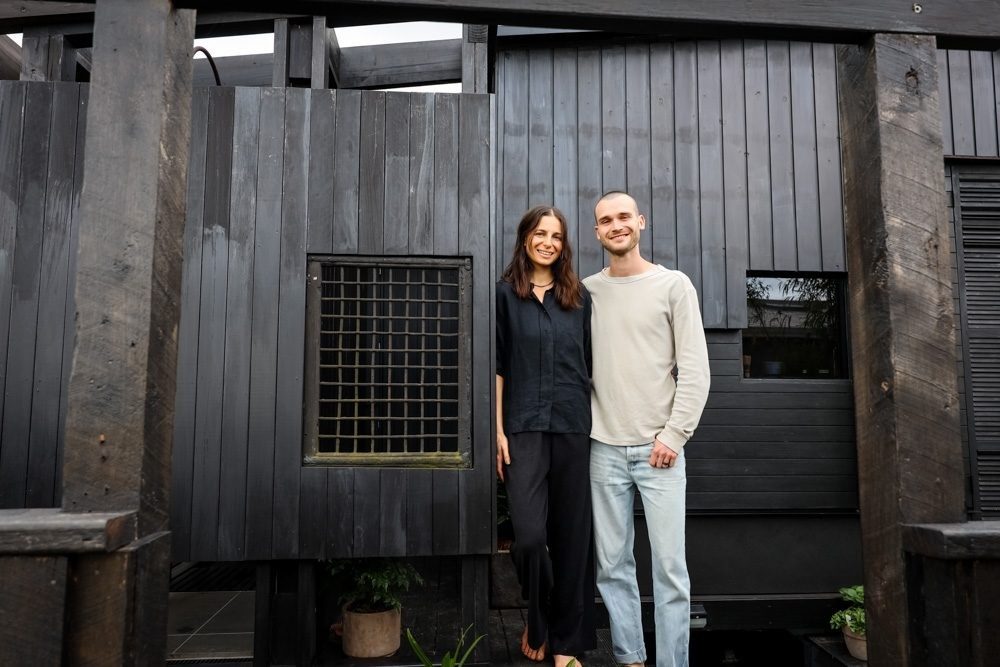 The Tiny House That Breaks All The Rules

The Tiny House That Breaks All The Rules

This tiny house breaks all the rules in the most brilliant ways. Absolutely filled with tiny house taboos, this home is nothing short of spectacular.