#VanLife In A Lovely LDV Camper 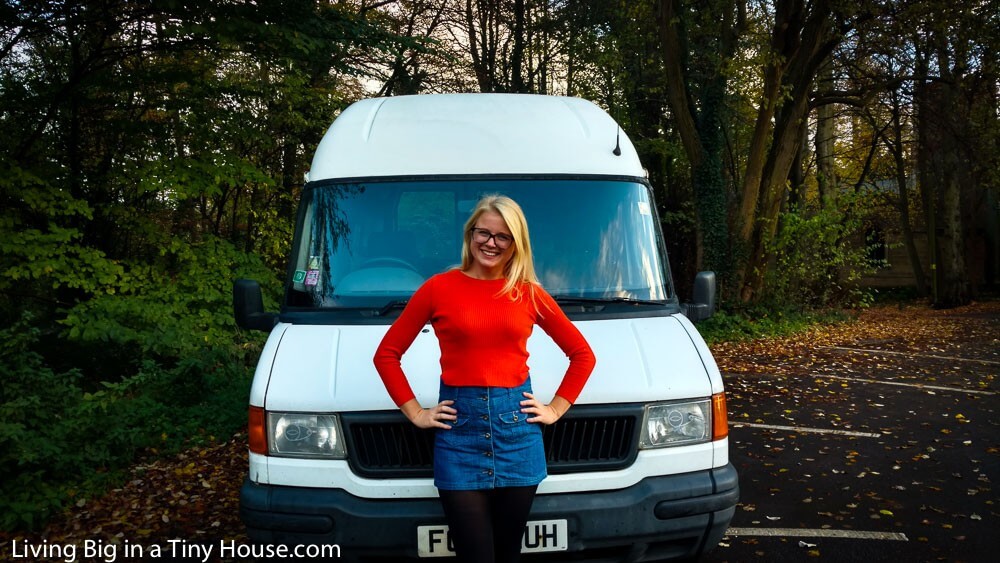 When we first me Lily Loveheart Kemp, she was living in an incredible pop-top caravan that she had renovated and which was parked in a backyard in the middle of Auckland City, New Zealand. The following winter, she packed her bags and began an incredible journey, traveling to the United Kingdom and together with her partner Ryan, converting an LDV van into a brilliant home on wheels, which they would live in while traveling around Europe.

Her time living in the pop-top caravan certainly taught Lily a lot about small space design and what was required to really make a tiny house on wheels into a comfortable home. The final result of her design project was a spectacularly renovated van, perfectly suited for a young couple on the road. 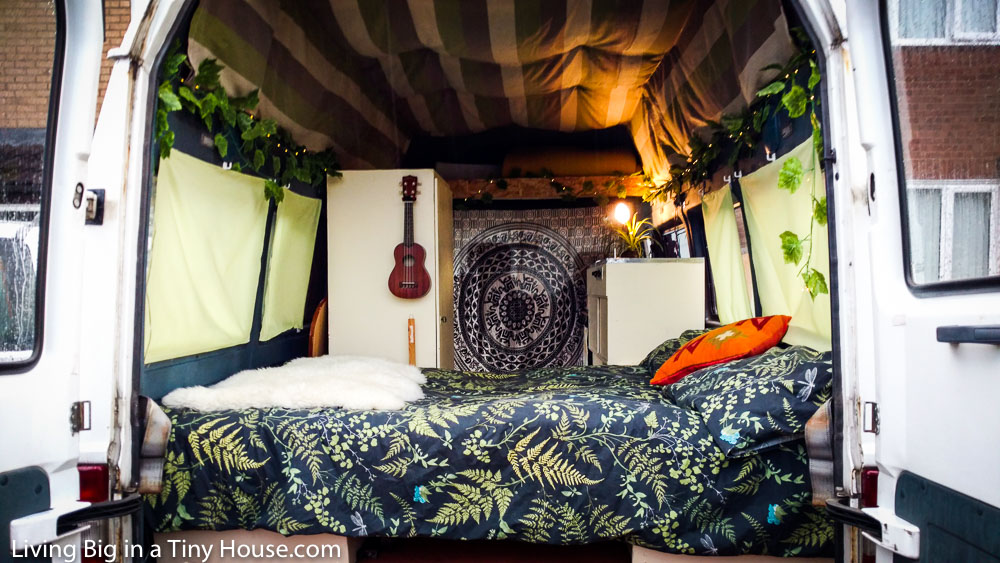 Despite the limited size afforded by an LDV van, this home certainly isn’t doing without much. It boasts a full kitchenette (borrowed from an old caravan) with sink, gas fridge, two hobs, a workspace and plenty of storage for all the kitchen essentials. There’s also additional over-cab storage, a wardrobe, cassette toilet, leisure battery, full length windows, a carpeted area for the bedroom, vinyl flooring in the kitchen and even a well insulated ceiling. The entire van is designed to run off electrical hook-ups and gas but the leisure battery is large enough for some unplugged adventures. 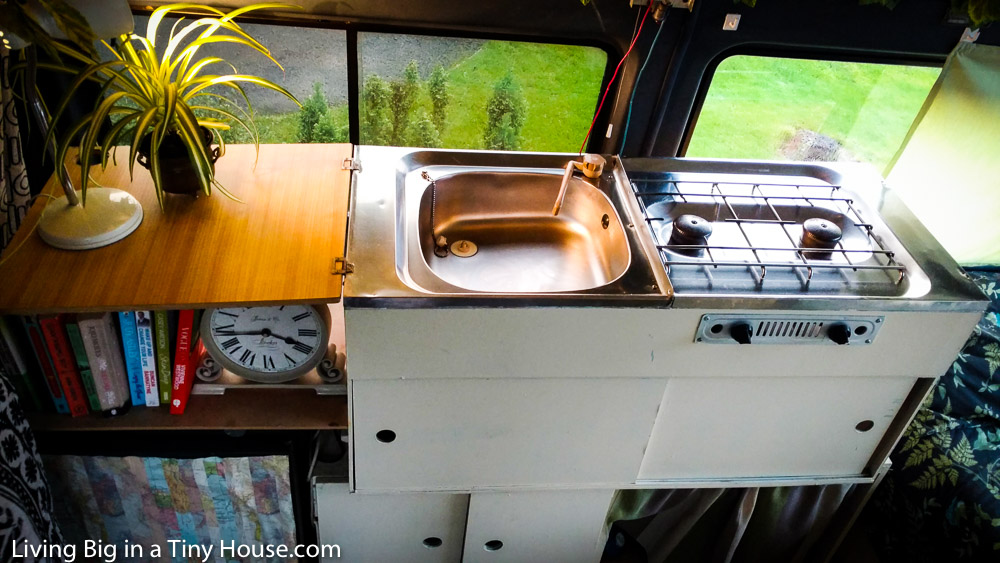 For Lily and Ryan, fitting out the van was a real learning curve! Being an ex-school bus, the van had 17 seats of which 14 of them needed to be removed, which is no small task!

“You-tube became a real source of knowledge for me and I learnt so many skills along the way. I used a few tricks like using the interior of a caravan so I didn’t have to build the furniture from scratch, but it was still a big job. There were a few moments where I felt like I’d reached a brick wall and thought “I don’t know how I’m going to do this”, but when there’s no other option then you push through and find a solution. Watching it all come together was beyond exciting, and made it so so worth it.”

After completing two small homes, Lily says she has certainly caught the design bug and she now can’t drive past a bus, shipping container or treehouse without dreaming of how she would turn it into a little home. 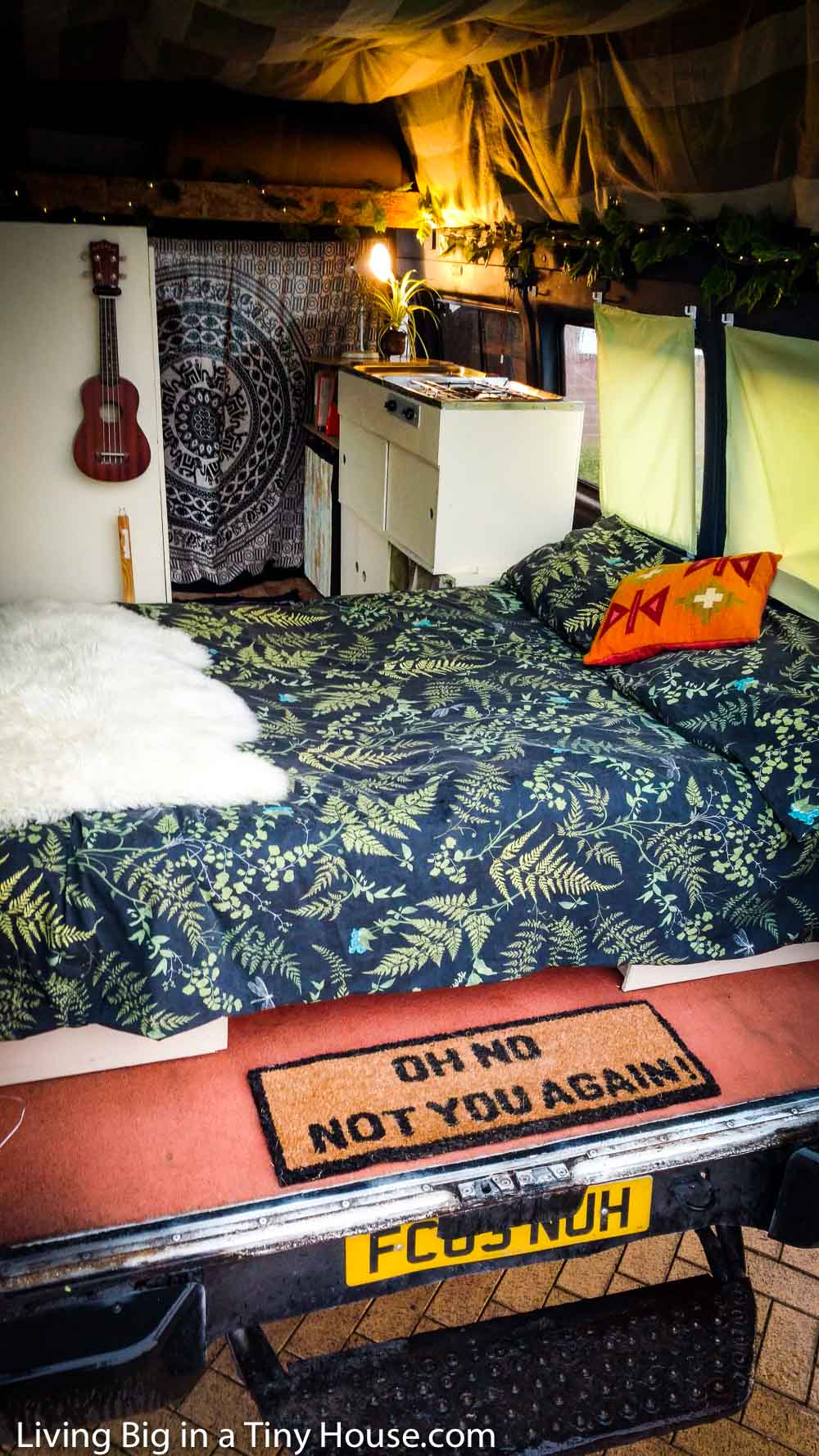 As much as she enjoyed the nitty gritty of fitting out the van, for Lily, the highlight of the project was decorating it once it was built.

“My Mum is a constant inspiration to me creatively, she just won NZ interior of the year with NZ house & garden, and she always taught me that it’s the little things that make a house (or van!) a home.”

Her favourite features of the LDV are the plants, the fairy lights, a rug (that she brought back from a trip to morocco) and the bedding, which is covered in a New Zealand fern design and which served as a lovely reminder of how far she had come and the country which she would return to and once again call home once her adventure was over. 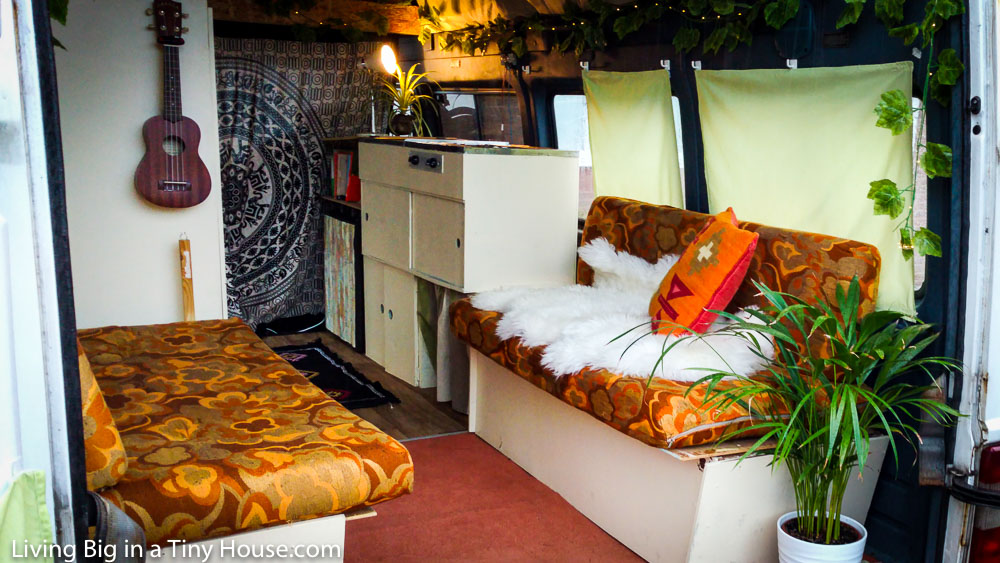 As for living in the van, it was certainly an interesting experience for the couple, and Lily admits that at times, living together in such a small space could be challenging.

“It definitely gets you outdoors a lot more, as you can tend to feel a little cooped up if you spend too much of your day in there, but I love being outdoors anyway so it worked really well for me.”

When it comes to day to day life though, Lily (who has never owned a TV or Computer) is more than happy with the simple things to keep her content and is satisfied as long as she has a cosy space to rest her head at night. 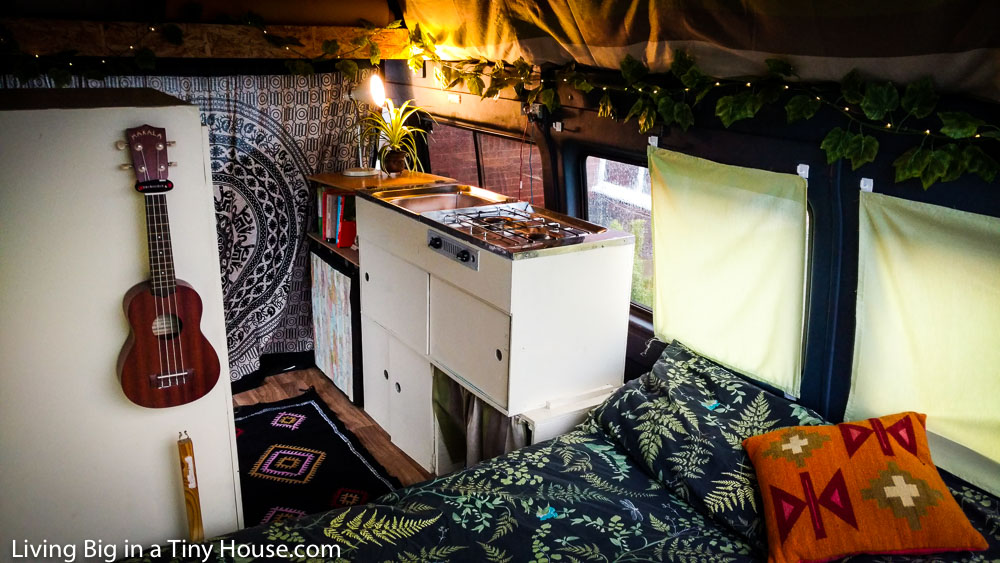 For this young adventurous couple, hands down the best thing about van life was the freedom that the little home on wheels afforded them.

“Having the entire country, or the whole european continent, as your backyard is an experience like no other but also the freedom of not being tied to rent payments, bills and contracts. It is hard to get ahead, especially for young people these days, and saving on those costs allowed me to use my money on the things that actually make me happy, such as travel.”

Europe really was their back yard too! Over their entire journey these two wanderers and their van covered 11,000 miles and 23 different countries. 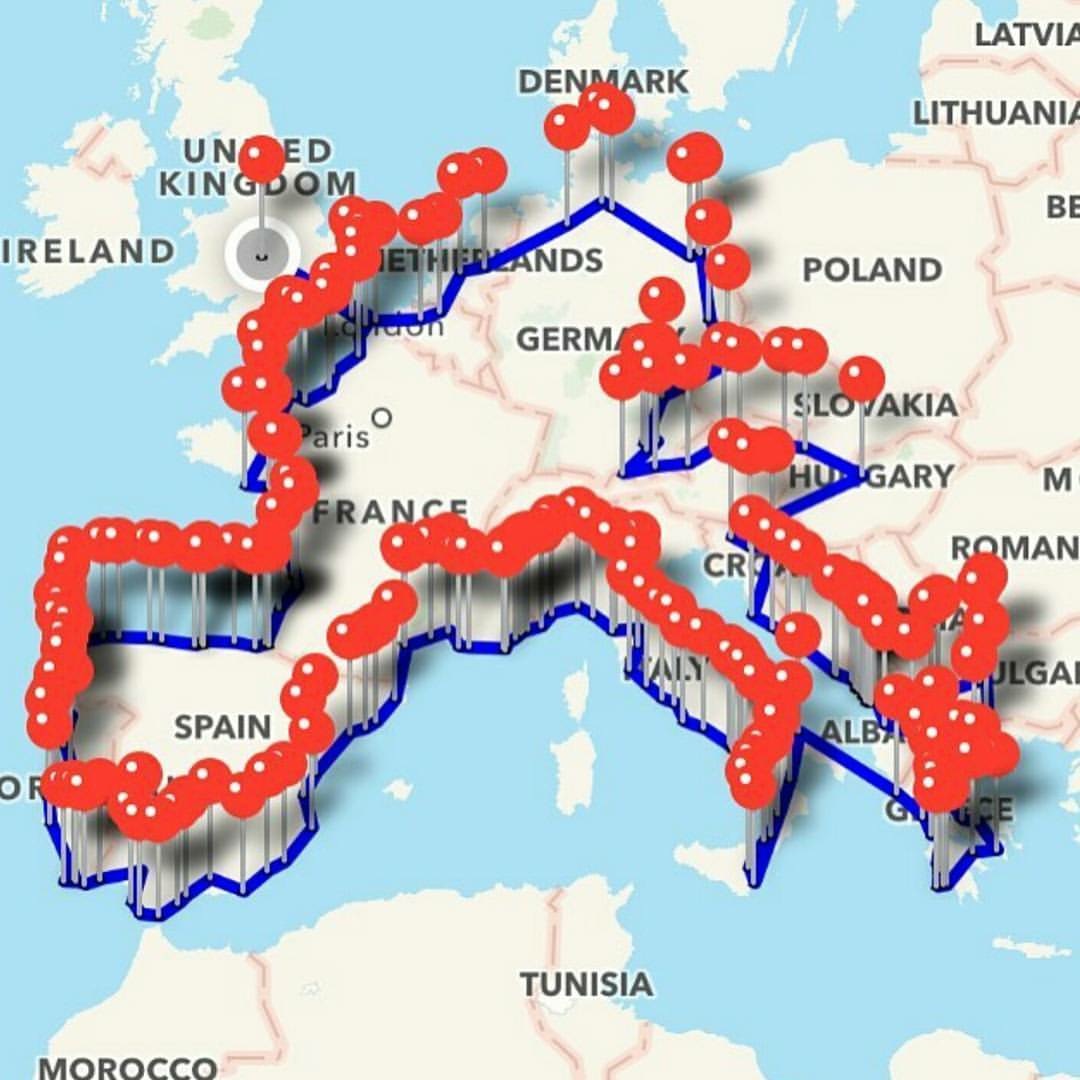 Despite the amazing adventure, living full time in a van isn’t without it’s challenges. Simple every-day things can become a lot more challenging when in a confined space.

“Both trying to get ready and dressed in the morning! When you’re in a small space it tends to be a one at a time sort of situation, it takes a bit of planning so that no one ends up late for work.”

As for the design of the van, the one thing that Lily would like to add next time is a toilet cubicle.

“I thought there was no point as I had no intention on being the one emptying it out! But after meeting so many people with cassette toilets in their vans and motorhomes, I realised that it’s not the dirty job I imagined it to be and wished I’d sorted a proper wet room.” 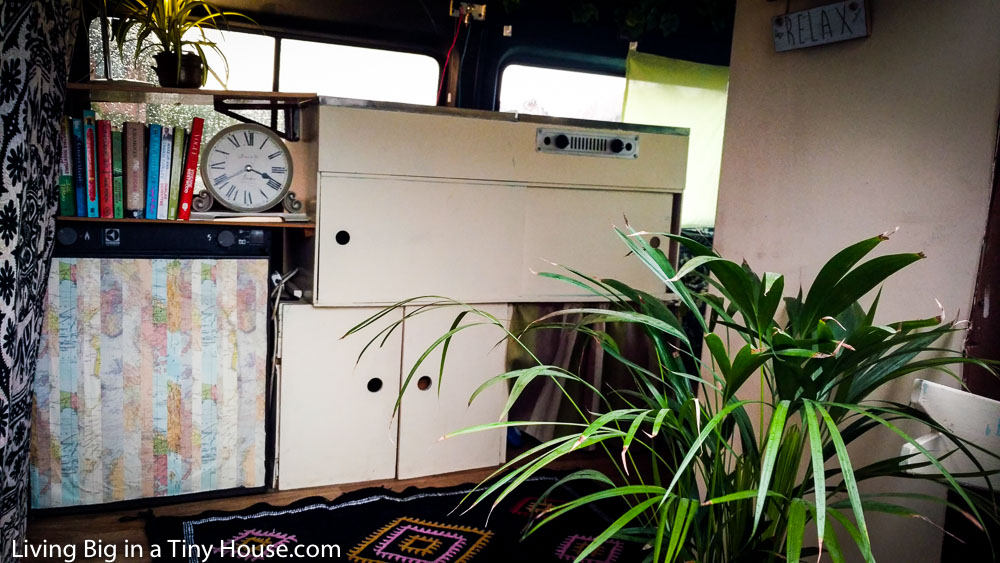 Before leaving on their European adventure, the couple spent two months living in Nottingham, working and saving up money for their trip. Finding a place to park the van long-term in the city was no easy task though.

“Two months before we left to travel Europe the van was ready to live in but we had nowhere to park it. I called around a lot of different campsites but as soon as I asked about a weekly rate they suddenly turned very cold and said it wasn’t possible. Finally, while on my way to work, I passed a “campsite” by the train tracks that was full of caravans. “Yes!” I thought, wandering in. Despite the strange stares I was getting from the “campers” standing in their doorways, I proceeded to find the owner and negotiate a weekly price with him. Growing up in New Zealand, it didn’t click that it was a gypsy (or travelling community) site until a man with about 30 rings in his ear gave us a tour with his two massive dogs on chains. I am so grateful for my naivety, as if I’d had the prejudice that many British have against the travelling community I would never have dared approach them. So shout out to the travelling community on Tolney Lane, thank you for all the laughs and for always making us feel welcome!” 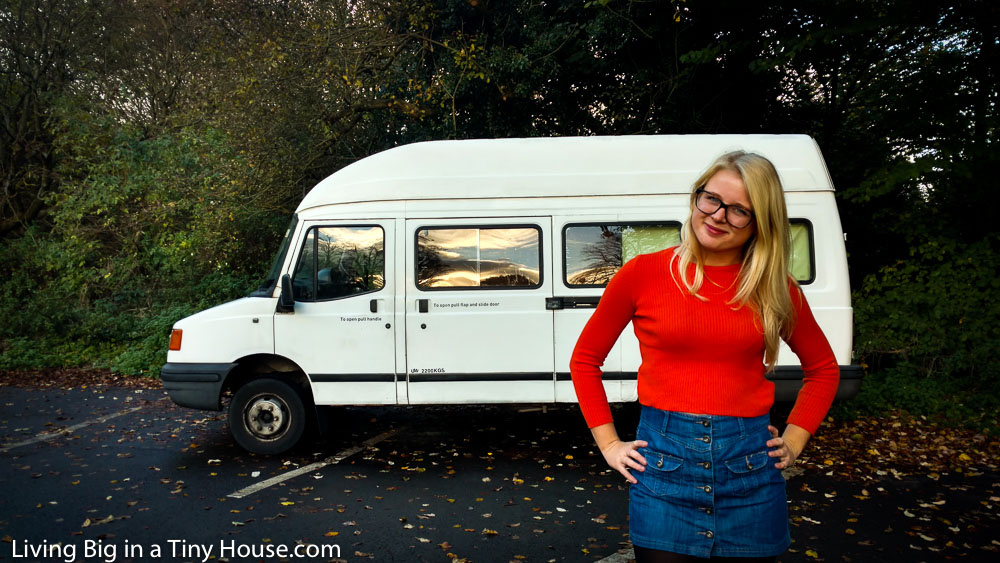 With this exciting life chapter now coming to and end, Lily and Ryan will soon be returning to New Zealand, where no doubt they will end up working on another incredible place to call home. In the mean-time, if you would like to follow Lily and her adventures, you can find her on Instagram. 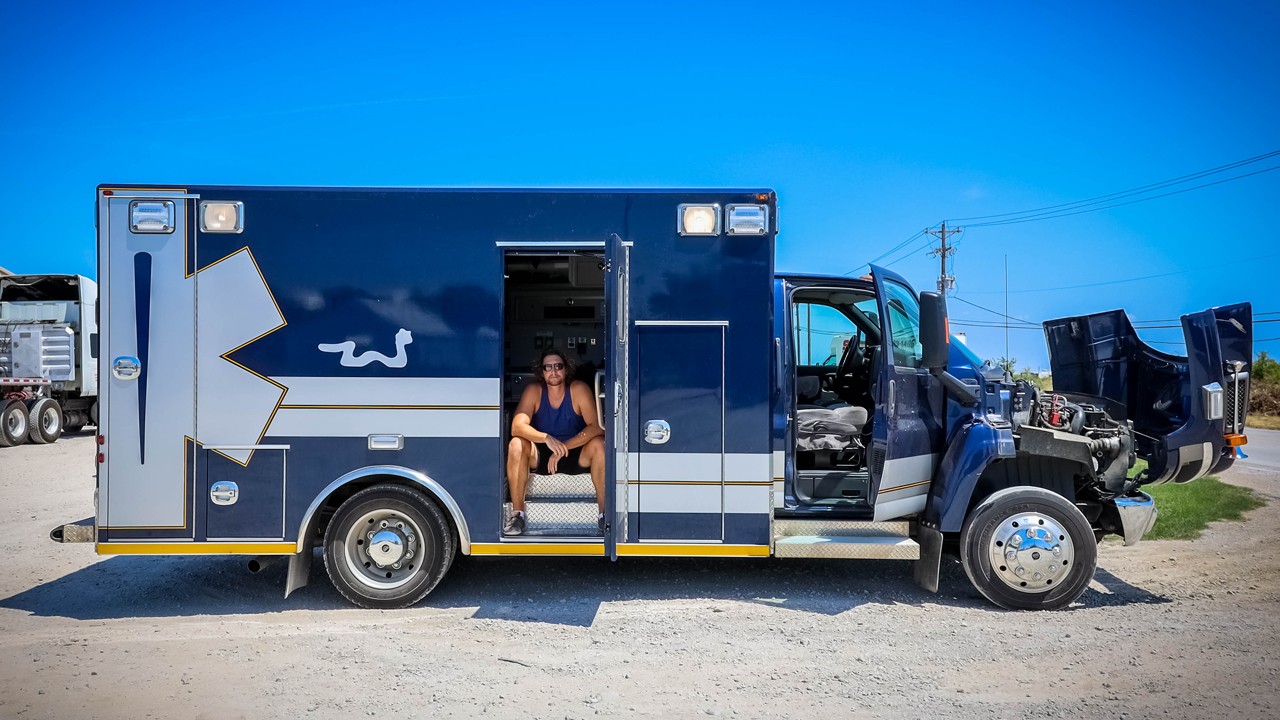 What Happened to our Campulance & Tiny House in the USA?

What Happened to our Campulance & Tiny House in the USA?

Many people have been asking what happened to our campulance and tiny house in the USA, so in this episode we give you the full story. 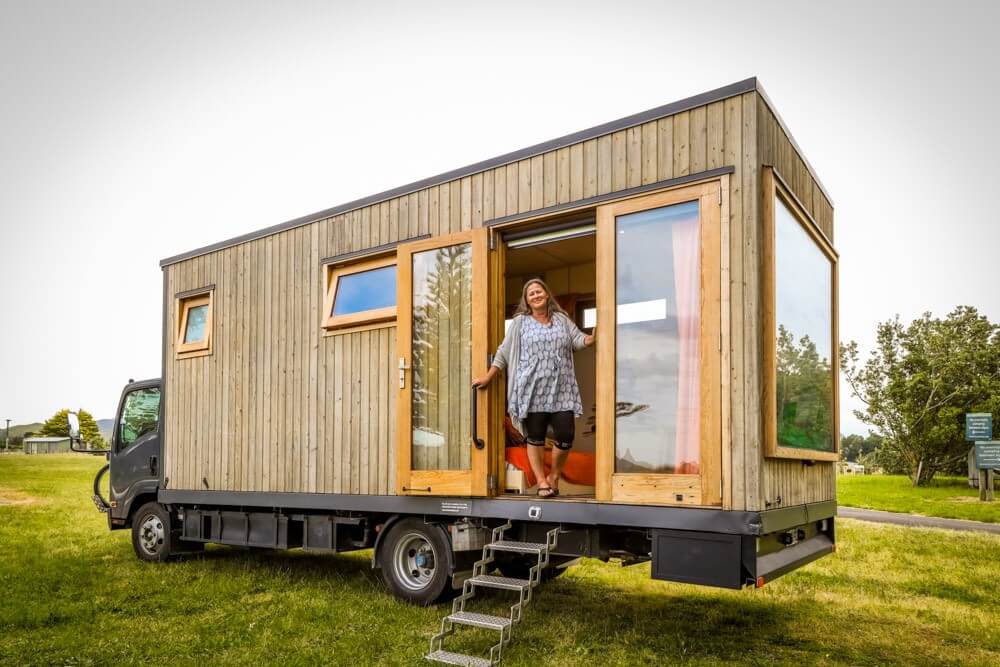 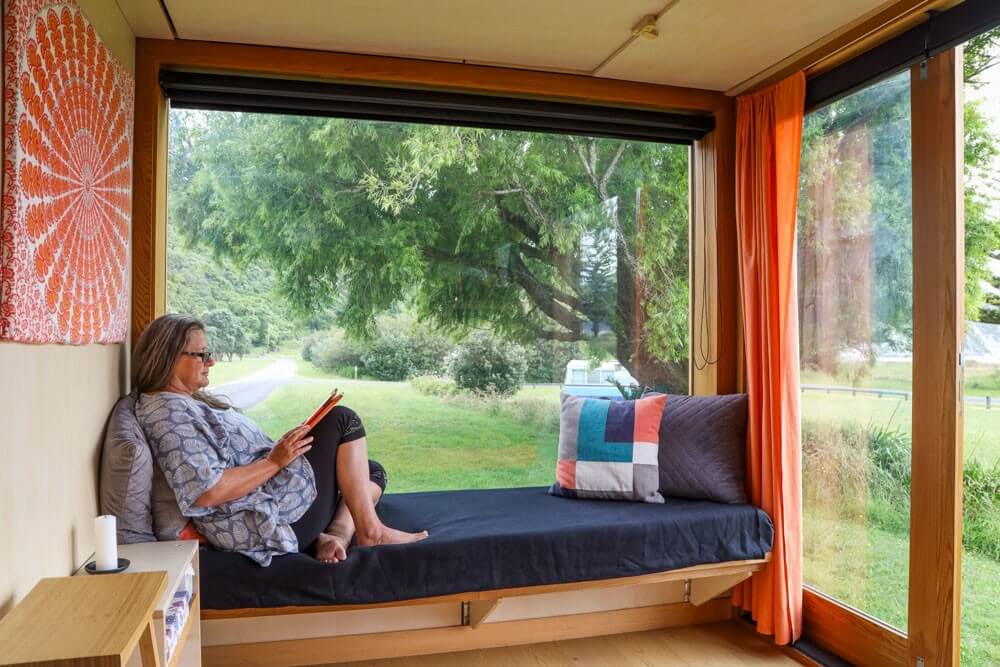 This incredible off-the-grid tiny house truck has been perfectly designed to be a comfortable home on the move! Solar-powered and mounted on the back of a brand new truck, this home is ready to go anywhere! Jude made the decision to construct her own tiny house truck after many years of living on the road in campers.